Just when you thought commentary on the CRU hacked emails could not get any more absurd, along comes National Post columnist and “environmentalist” Lawrence Solomon to up the ante. Believe it or not, Solomon’s latest over-the-top screed accuses Google of censoring search results to downplay the so-called Climategate scandal. But, as they say in the newspaper biz: “Check a story, lose a story”.

Solomon, of course, is best known as the indefatigable writer of serial nonsense in the set of columns known as the Deniers, each one profiling a researcher who supposedly had inconvenient facts to present for the IPCC. The profiles were pretentiously labeled with roman numerals; I think he got up to around Part XXVIII, before moving on to other science-mangling pursuits. Problem was, some of the genuine scientists Solomon misrepresented took umbrage, and one, astrophysicist Nigel Weiss, had to wait months for the Post to retract what he considered a “slanderous fabrication”.

In his recent Full Comment post, Solomon piled one whopper on top of another in an effort to paint Google as an environmentally correct gatekeeper of information, and suggested readers in search of the truth would be much better off with Microsoft’s benighted new search engine Bing. His first example concerned an unexplained scandal of apparently epic proportions.

Search for “Googlegate” on Google and you’ll get a paltry result (my result yesterday was 29,300). Search for “Googlegate” on Bing, Microsoft’s search engine competitor, and the result numbers an eye-popping 72.4 million. If you’re a regular Google user, as opposed to a Bing user, you might not even know that “Googlegate” has been a hot topic for years in the blogosphere — that’s the power that comes of being able to control information.

Well, if Solomon is not going to bother to explain what Googlegate actually is, far be it from me to do so. But how could there be 72 million hits on Bing for a soi-disant scandal that almost no one has ever heard of? The sad answer is – sad for both Bing and Solomon, that is –  there aren’t.  There are only 400 or so. And here are the last handful:

Riveting stuff, I’m sure you’ll agree. Anyway, for some reason, Bing’s estimate is waaaay off, but you can only figure that out by going to the end of the results (editing the start parameter in the URL, naturally).

That’s not a promising start, but Solomon is quickly on to the main event – a rigorous comparative study of the two search engines’ treatment of the term “climategate”. According to Solomon, Google has steadily whittled away at the number of pages it returns, while Bing lets the light of truth shine – all 50 million pages of it.

And yesterday, when I checked, Google reported a mere 1.8 million climategate pages.

Bing, in contrast, didn’t make climategate pages disappear. As you’d expect from a search engine that wasn’t manipulating data, search results on Bing climbed steadily until they peaked at around 51 million, where they have remained since.

When I checked I saw 18 million hits, not 1.8 million. But, hey, what does an order of magnitude matter? More to the point, Solomon seems blissfully unaware that both search engines return a maximum of 1000 hits, not that he or anyone else is ever going to go past the second page of results. And we’ve already seen Bing’s rigorous hit estimation algorithm in action.

Well here are the suggestions for typing “c-l” for Google: 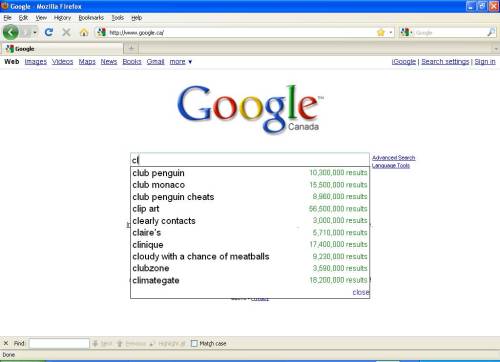 And Bing? Not so much.

And maybe, just maybe, the users who reported a lack of query suggestions in Google had the feature turned off. It is a user option, after all.

[Update, January 20: The ranking of auto-completed suggestions appears to be almost entirely driven by the search popularity of the various search terms. For example, check out the trends of four of the search terms shown above in the following dynamic chart:

cloudy with a chance…

The tiny blue blip at the end of 2009 is “climategate” (blue). No wonder “club penguin” is at the top of the suggestion list and “climategate” at the bottom (and gone from Bing). In fact, climategate might well not have made the list at all were it not for strong news coverage. Of course, it makes eminent sense that auto-completion would be based on actual search behaviour and interest, rather than sheer number of web pages.

And here is the chart for the last 30 days (again updated dynamically), which clearly shows just how low climategate search volume is, even at a time of maximum coverage from the right-wing press.

As of current writing, the top “cl” search term, “club penguin”, has more than 100 times the search volume of “climategate”. It’ll be interesting to see if that increases as ClimateHack fades from the news. ]

Are we done? Not quite. Solomon has complaints about the pages returned. The first hit returned by Google is – the horror of it – the Wikipedia page on the “Climatic Research Unit hacking incident”, which Wikipedia refuses to call by its true and proper name, as determined by a consensus of objective bloggers and right-wing columnists.

For those whom Google can’t steer away from “climategate,” and who key in all 11 letters to learn about the eye-opening emails, Google goes the extra yard in keeping people in the dark — it dishes up a page that trivializes the scientific significance of climategate.

Well, sure, after all that compelling analysis, how can we not  accept Solomon’s persuasive case for the “scientific significance of climategate” and the Google/Wikipedia conspiracy to “trivilaize” it. On the other hand, there are other equally plausible   explanations. For example, perhaps William Connolley (aka Stoat) has been enlisted in a socialist plot to drive Lawrence Solomon mad. If so, it looks like it’s working.

But surely at least some people will avoid Google’s snares, and go to the second or even the third link. So let’s see what they’ll find.

Number two is none other than … the National Post! And that’s followed by two hits from WUWT. The truth is out there, and even Google can’t stop it.

There’s no trace of the Post at Bing. But I did find the highly informative Climategate.com, which recently featured as its lead post a glorified ad for the new Steven Mosher/Tom Fuller quickie book on Climategate. Surely, then, Post editors will agree with the sentiments of this set of search  links.

Solomon also has a ready answer as to Google’s motivation for “manipulating” search results.

Money and power could have something to do with it. Search for Google and its founders and you’ll see that they have made big financial bets on global warming through investments in renewable and other green technologies; that they have a close relationship with Al Gore, that Google CEO Eric Schmidt is close to Barack Obama.

Alas, a full discussion of the scientific wisdom of Solomon, as well as his mysterious Energy Probe “environmental” organization, must await another post.

So much idiocy, so little time.