Looking back and looking forward

Given the time of year, and with a spiffy report from WordPress on Deep Climate sitting in my mailbox, this seems as good a time as any to take stock as well as talk a little bit about what’s coming up in 2011.

Deep Climate saw the light of day in late 2008, although I did not post regularly until early 2009. The blog was an outgrowth of my previous “citizen” journalism with SourceWatch.org (you can see some of my efforts there in the SourceWatch Articles links to in the sidebar). Revisiting the Deep Climate archives for 2009 shows articles on such diverse topics as the annual cycle in the UAH tropospheric series to the various shenanigans of the anti-science astroturf group Friends of Science. Towards the end of 2009, I turned my attention to McIntyre’s ClimateAudit blog, and eventually worked my way back to taking a closer look at the 2006 Wegman Report. As you’ll see in the report that follows this post, those topics dominated 2010, which also saw daily average page views rise to over 1000, as other bloggers (and even occasionally the mainstream press) began to take notice.

As a new cohort of anti-science Republicans gathers in Washington, 2011 will no doubt feature further exploration of past attacks on climate science and scientists, as well as looking at the renewed efforts to forestall serious discussion of responses to anthropogenic global warming, let alone effective action.

I’ll certainly continue to cover all that, but I also hope to diversify somewhat. For example, I’m very interested in emerging climate science, such as the NOAA/NESDIS tropospheric temperature analysis, and the ongoing collaborations between statisticians and paleoclimatologists (as exemplified in the work of Li et al, or Cressie and Tingley). I’d also like to get back to exposing various anti-science activities here in Canada, where Stephen Harper’s Conservative government continues to drag its feet, while undercutting the science behind the scenes.

Before leaving you to look at the year end report, I’d also like to thank all of you, whether frequent commentators or quiet readers, for your support and attention in the past year. And I wish you all the best for the coming year.

2011 will undoubtedly be a very interesting year. One can only hope it is for the right reasons.

The stats helper monkeys at WordPress.com mulled over how this blog did in 2010, and here’s a high level summary of its overall blog health: 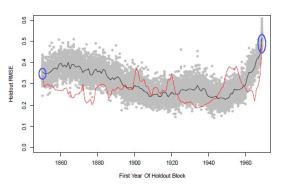 The Louvre Museum has 8.5 million visitors per year. This blog was viewed about 370,000 times in 2010. If it were an exhibit at The Louvre Museum, it would take 16 days for that many people to see it.

In 2010, there were 44 new posts, growing the total archive of this blog to 90 posts. There were 143 pictures uploaded, taking up a total of 39mb. That’s about 3 pictures per week.

The busiest day of the year was August 19th with 3,713 views. The most popular post that day was McShane and Wyner 2010 .

Where did they come from?

The top referring sites in 2010 were realclimate.org, scienceblogs.com, rabett.blogspot.com, wattsupwiththat.com, and desmogblog.com.

These are the posts and pages that got the most views in 2010.

Wegman under investigation by George Mason University October 2010
277 comments and 2 Likes on WordPress.com

Replication and due diligence, Wegman style November 2010
214 comments and 5 Likes on WordPress.com

Steve McIntyre and Ross McKitrick, part 2: The story behind the Barton-Whitfield investigation and the Wegman Panel February 2010
155 comments

This entry was posted in Climate science disinformation. Bookmark the permalink.

22 responses to “Looking back and looking forward”