Recently I noted that planned expansion of  the Alberta oil sands can not possibly be reconciled with the Harper government’s promises to reduce greenhouse gas emissions  over the next few decades. (And Simon Fraser climate policy researcher Mark Jaccard apparently agrees). And I also exposed the ever mounting number of evident links between the Conservative government, including Natural Resources Minister  Joe Oliver, and the pro-oilsands EthicalOil.org PR group (a.k.a the Ethical Oil Institute).

Now Oliver has upped the ante on both contentions spectacularly. Answering questions from NDP environment critic Megan Leslie in the Canadian Parliament today, Oliver repeated a previously debunked claim that oil sands emissions (not intensity, but actual emissions) have fallen. And he implied that emission intensity (i.e. GHGs per barrel) continues to fall. Those same mistaken assertions were also made by former Ethical Oil executive director Alykhan Velshi in the ironically titled “Myths and Lies” section of EthicalOil.org, albeit with incomplete hasty corrections later on. And Oliver never did come clean on his understanding of climate science, doing little to reverse the impression that anti-science contrarians have gained a significant foothold in Ottawa, and that Stephen Harper’s Conservatives have no intention of meeting their climate commitments.

As we pick up the exchange part way through (recorded at iPolitics), the NDP’s Leslie asked Oliver a very simple question:

Mr. Speaker, I have invested over $10 billion in reducing greenhouse gas emissions, creating energy efficiency programs. The oil sands, which represent one-thousandth of global emissions, have had their emissions reduced by over 30% in the last 12 years. The gap between oil sands oil and conventional oil is narrow, about 5% to 10%, and it is narrowing even further. We favour technological innovation which will improve the performance of the oil sands.

The first canard is the statement that “oil sands … have had their emissions reduced by over 30% in the last 12 years”.

According to Environment Canada’s measurements, the oilsands has reduced its GHG output by 29% since 1990.

But after I pointed out that error in my first post on Ethical Oil, the statement was magically amended:

According to Environment Canada’s measurements, the oilsands has reduced its per barrel GHG output by 29% since 1990. [Emphasis added]

Of course, Oliver’s math is a little off since 1990 was 22 years ago, not 12. And the most recent commonly cited figure given by Environment Canada is indeed 29%, not 30%. But that’s par for the course for Oliver, as we shall see.

It’s pretty shocking that Oliver doesn’t even know the difference between overall emissions and emissions per barrel. In fact, savvier oil sands boosters are careful to  cite only emissions per barrel, precisely to distract attention from the precipitous rise in overall oil sands emissions. Those emissions have risen from 30 Mt in 2005, to about 50 Mt in 2010 and are set to rise to 90 Mt, or at least 15% of total Canadian emissions, by 2020. And it won’t stop there as rapid oil sands expansion is expected to continue through 2030 and beyond.

The confusion and errors continue with Oliver’s next statement:

The gap between oil sands oil and conventional oil is narrow, about 5% to 10%, and it is narrowing even further.

Oliver’s low 5%-10% figure is based on misleading life cycle analyses that use a well-to-wheels life cycle analysis to minimize differences in emissions due to actual oil extraction and production, as well as comparing the oil sands to a range of sources instead of the actual mix of conventional oil used in, say, the U.S.

But for now, let’s look at the gap that is said to be “narrowing”, assuming that Oliver actually means to contend that GHG emissions per barrel are falling.

As I also pointed out in the case of Ethical Oil, even this reduced claim is false.

In fact, average per barrel emissions have stalled and even climbed a little over the last five years, according to Government of Canada figures (as noted in the recent must-read Pembina Institute briefing note  Oil Sands and Climate Changein Figure 3  on p.6). 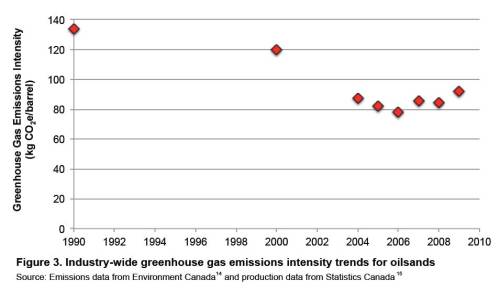 The chart shows that per barrel emissions have climbed about 15% or so since 2006. (Readers might recall that the CBC Radio’s Anna Maria Tremonti nailed hapless Ethical Oil spokesperson Kathryn Marshall on this very point). And GHG intensity is expected to continue climbing as the proportion of bitumen obtained via more GHG-intensive SAGD drilling techniques rises.

There is a radical fringe group that is trying to block Canada’s movement forward and is moving our economy forward. They do believe in elaborate scientific conspiracies theories and they are backed by big foreign groups. They are called climate change deniers.

I would like the minister to clarify, does he believe in the science of climate change or is he a denier?

But once again, Oliver never did give a straightforward answer to the actual question.

Mr. Speaker, the member opposite continues to talk about the radicals. Let’s remember what some people believe. There are some radicals who do oppose all hydrocarbon development. There are some who think that one-thousandth of 1% addition to global warming will somehow destroy the planet. These are people who are not backed by science.

So now “one-thousandth” has been reduced to “one-thousandth of 1%”. Perhaps we should give Oliver the benefit of the doubt and presume that he misspoke, meaning simply “one-thousandth” both times. That’s fairly close to the correct figure for overall global emissions although it obscures the skyrocketing share of Canadian emissions from the oil sands, which are on track to derail Canada’s GHG reduction commitments.And it significantly downplays the total impact of the oil sands, as downstream emissions such as foreign upgrading and actual fuel use are not included.

On the other hand, it’s tempting to compare that second try to Velshi’s conflation of “natural” and “human” emissions at EthicalOil.org (following Ezra Levant’s earlier lead).

Since the entire Canadian economy is responsible for just 0.3% of the whole world’s natural  and manmade carbon emissions, GHGs from the oilsands total just over one-hundredth of one percent of all the greenhouse gases going up into the atmosphere, or 0.015%.

If so, then Oliver has managed to move the decimal point yet one more place forward in his effort to downplay oil sands impact.

All this would be laughable, were it not coming on the heels of other indications that Conservatives are less and less inclined to pay climate science even the lip service they managed when the IPCC AR4 report was released in 2007.  And the strong hold that anti-science contrarianism has had on the Conservative Party and its Canadian Alliance predecessor is, well, undeniable. It can be seen clearly from Stephen Harper’s arrival as Opposition Leader to his election as Prime Minister in 2006 and beyond. And the similarities of Conservative positions to those of, say, the Friends of Science in the runup to the 2006 election, were quite striking despite attempts to hide it.

With a majority government relentlessly focused on ramming through as much oil sands expansion and pipeline infrastructure as possible, the Conservatives appear to be once more playing to their climate “skeptic” base.

It’s high time for the Conservatives to end this charade, and drop any pretense that they intend to honour their international and national commitments on climate change. Or that they even take anthropogenic global warming seriously.

Then we could all have a long overdue discussion as to whether massive expansion of the oil sands is really in the “national interest”. At the very least, it is highly questionable that the “national interest” can possibly served by setting Canada on a collision course with global efforts to curb anthropogenic global warming.

And if saving the planet is not enough, consider that the Conservatives’ path, based on misguided investment in a legacy resource, may well result in dead-end economy to boot.

[Update: Here is the entire exchange between Megan Leslie and Joe Oliver – all six minutes of it. ]