In my previous discussion of the extraordinary 2012 melt, I noted the eclipse of the old daily record on August 24, three weeks ahead of the 2007 pace. But I also gave a series of short-term  projections for the September extent average, which is the metric typically used to track the decline in Arctic sea ice. The  2012 September projection now stands at 3.56 million sq km, slightly down from my previous projection of 3.67 million sq km. That’s more than 700,000 sq km less than the previous 2007 record of  4.30 million sq km.

As I discussed in greater detail last time out, these short-term projections are generated by regressing the most recent 5-day sea ice extent level against the eventual September average. This seems to give a very reasonable result, once one is past the first week of August or so. Here are four such projections, with the latest (purple circles) based on the five-day average for August 22-26. 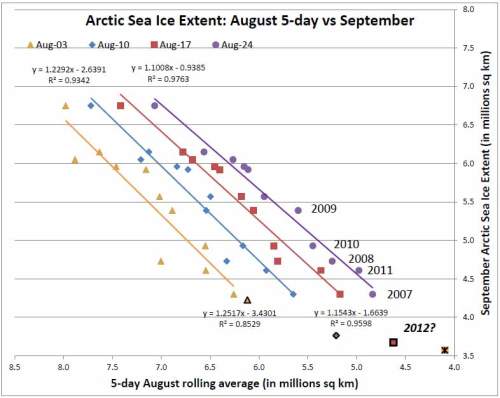 This gives a September 2012 projection of 3.56 +/- 0.13 million km  (as seen in the lower right hand corner), down slightly from the previous week. Here is the whole series to date. 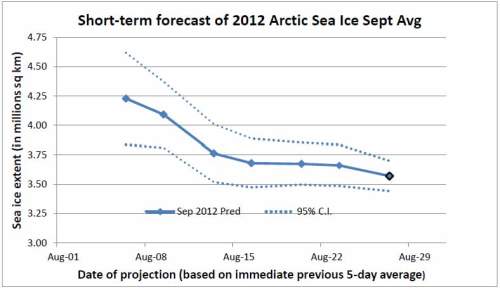 The confidence interval continues to tighten; past projections based on August 27 have correlation of coefficient of about 0.98. The resulting tight forecasts can be seen in the model’s simulated past projections for August 27. 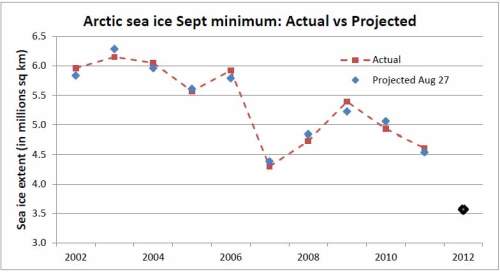 Arctic sea ice continues to melt at a record pace (yesterday’s daily level was at 3.8 million sq km), so the next projection update may be slightly lower. The eventual level will depend largely on when the minimum is actually reached; recent years’ five-day minima have ranged from early September (e.g. 2010) to late September (e.g. 2011). But at this late stage, I would be surprised if the 2012 September average  went below 3.4 million sq km (or above 3.7). 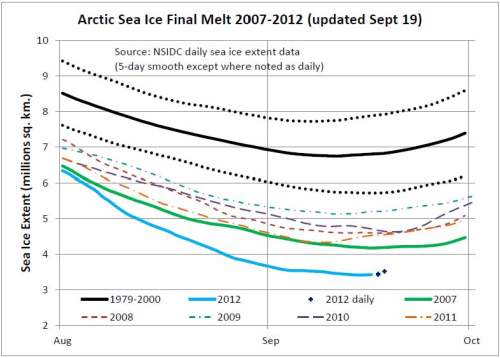 I’ll not only update the September 2012 projection in a few days, but I’ll also be looking at the future course of the Arctic sea ice “death spiral“. (Unsurprising sneak preview: Virtually sea-ice free summers, defined as September extent below 1 million sq km, will likely arrive in the Arctic before 2030).

[UPDATE Sept. 3-6: The updated projections are:

[UPDATE Sept. 13: Sea ice extent has flattened out considerably in the last week or so; nevertheless the 5-day average is still descending, if ever so slightly. The net effect is that the short-term projections for the September average are edging upwards.

Now that we’re in September, I’m tracking two short-term models, one based on the latest 5-day average (as before), and the other on September average to date (obviously, both models gave the same result on September 6). I tend to favour the latter, as it is more stable, and looks to perform a little better since 2007. Currently the “5-day” model projects a September average of 3.67 +/- 0.11 million sq km, and the “Sept to date” projects 3.63 +/- 0.11 million sq km. ] 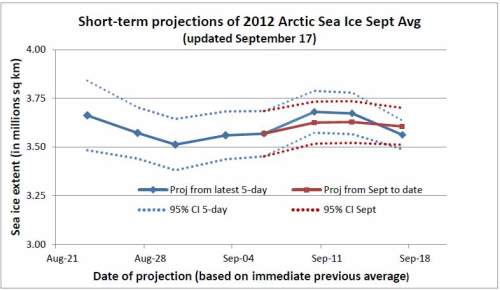 And rest assured that the horrific irony of Conservative prime minister Stephen Harper’s recent tour of the Canadian North to tout growing resource extraction opportunities will get a closer look. Harper appears to have  failed to mention climate change and its devastating implications for the North – despite  ending his tour on the very day the new daily sea ice extent minimum record was set.