Anatomy of a lie, part 2: Gunter to IBD to Will

There I focused on a column by Lorne Gunter in the Calgary Herald (newspaper of record in the economic capital of the oil-rich province of Alberta, Canada). In the mean time, George Will, has also weighed in on the so-called predictions of global cooling, as discussed here by Joe Romm. Will, who apparently has read the same number of scientific papers as Gunter (i.e. zero),  apparently got some key “information” from an editorial in Investors’ Business Daily (IBD). And guess who was the major source for IBD …

Here, once again, are key passages from Lorne Gunter:

Latif is one of the leading climate modellers in the world. He is the recipient of several international climate-study prizes and a lead author for the United Nations Intergovernmental Panel on Climate Change (IPCC). He has contributed significantly to the IPCC’s last two five-year reports that have stated unequivocally that man-made greenhouse emissions are causing the planet to warm dangerously.

Yet last week in Geneva, at the UN’s World Climate Conference–an annual gathering of the so-called “scientific consensus” on man-made climate change —Latif conceded the Earth has not warmed for nearly a decade and that we are likely entering “one or even two decades during which temperatures cool.”

Now here’s the corresponding excerpt from the IBD editorial at Investors.com:

In a speech last week at the U.N.’s World Climate Conference in Geneva, Professor Mojib Latif of Germany’s Leibniz Institute of Marine Sciences at Kiel University, one of the world’s foremost climate modelers and a lead author for the United Nations Intergovernmental Panel on Climate Change acknowledged that the Earth has been cooling and is likely to continue that trend for the next couple of decades.

It looks like someone’s been taking lessons from the EPA’s Alan Carlin, although they’ve made at least a desultory effort to cover their tracks!

Note that IBD, refers to a “speech” (actually it was a presentation) held “last week”. But in fact, Latif’s presentation was on September 1, a full three weeks before the editorial appeared on September 22. So, obviously IBD just copied Gunter (either directly or via one of many reposts) without bothering to check the actual date.

More substantially, the IBD simply parroted Gunter’s claim that Latif had “acknowledged”  (“conceded”) past cooling and that this trend was “likely” to continue for up to two decades. (In fact, IBD goes even further, referring to a likely continuing trend “for the next couple of decades”). As I pointed out previously, Latif never made either assertion.

Not that any of that matters to the likes of George Will, who said, pointing to the IBD editorial:

Actually, Latif has said he anticipates “maybe even two” decades in which temperatures cool.

Now here’s something curious. The IBD quote, as noted above, does not qualify the cooling period in the same way. Nor does it quote Latif directly or use the phrase “maybe even two”.  So, presumably Will read about this somewhere else as well.

Now, in fact, Latif did use that phrase in his presentation:

However we all know there is variability, and this variability may look like this. This has been actually derived from the 20th century by just removing some exponential fit. And the two of course [are] superimposed. And then the real evolution of, say, globally averaged temperature would look like this. 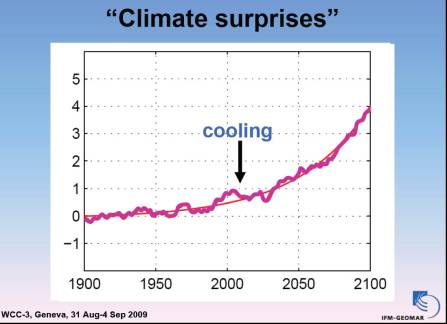 And then you see right away [that] it may well happen that you enter a decade or maybe even two, when the temperature cools relative to the present level. [Emphasis added]

But as the full excerpt makes clear, and has been explained both here and elsewhere, that part of Latif’s presentation concerned a purely hypothetical situation, not an actual prediction.

So once again, we are left with questions for George Will and his editors. How did Will manage to quote the correct words, and yet get the context completely and utterly wrong? What sources did he rely on?

And most important of all – will the Washington Post correct this egregious error?

This entry was posted in Climate science disinformation and tagged George Will, Lorne Gunter, Mojib Latif. Bookmark the permalink.

One response to “Anatomy of a lie, part 2: Gunter to IBD to Will”