Round and round we go with Lindzen, Motl and Jones

As I predicted two weeks ago, there has been a media and blog frenzy over the statement by climatologist Phil Jones that  global warming since 1995 has not been “statistically significant”.

Now might be a good time to reflect on the origins of this latest variation on the “global warming has stopped” meme. And it turns out that the originator of the “no significant warming since 1995” variation is none other than climate contrarian Richard Lindzen, ably assisted by blogger Anthony Watts (of WattsUpWithThat fame) and physicist Lubos Motl. Indeed, the history of this meme points up a disturbing symbiosis between the U.K. media and the contrarian blogs.

Can I call them or what? Back on February 16, I wrote:

Get ready. Lies originating in the U.K. over the weekend in newspaper stories by Jonathan Leake of the Times and Jonathan Petre of the Mail on Sunday, are about to hit the contrarian echo chamber.

As I write this, Google counts 2.3 million hits for the search with the exact terms “warming since 1995” and “Phil Jones”.

Early media outlets onto the bandwagon included the usual suspects, FoxNews and the Wall Street Journal, with the Washington Post’s George Will weighing a few days later. Here in Canada, contrarians were almost as quick –  the Jones 1995 statement was used by the National Post’s Lorne Gunter (explaining the meaning of ClimateGate) and the Globe and Mail’s Margaret Wente (demonstrating that the “science isn’t settled”). And, as we saw recently, Gunter has been double dipping, recycling the bogus claim to  attack the credibility of the instrumental temperature record from HadCRU and NASA.

Indeed, there has been so much media commentary about Jones’s supposed “U-turn” that Nigel Lawson‘s Global Warming Policy Foundation has reprinted no fewer than four opinion pieces touching on the subject in the last week alone.

The sequence of events from the BBC “online interview” with Jones seemed straightforward enough, as I outlined in my previous post, Morano sends lies from UK Times and Daily Mail around the world.

But a nagging question remained. The BBC’s Roger Harrabin stated that his questions were “gathered from sceptics” and indeed many of them were familiar to me as thinly disguised contrarian talking points. For example, some time ago I wrote about the Ian Plimer’s invocation of previous warming periods to argue that modern warming might also have the same natural causes.

Yet I had never come across the particular claim of lack of  “statistically significant warming” since 1995. Presumably, though, this particular contrarian talking point was already out in the denialosphere. And, indeed, a quick check of Google turned up the earliest known sighting of this version of the “global warming has slowed down” meme –  a short and sweet  email from Richard Lindzen to Anthony Watts in March 2008.

Look at the attached.  There has been no warming since 1997 and no statistically significant warming since 1995.  Why bother with the arguments about an El Nino anomaly in 1998?  (Incidentally, the red fuzz represents the error ‘bars’.)

The supplied chart was from the HadCRU record: 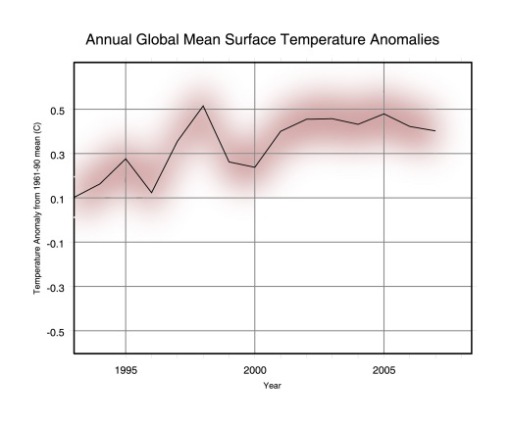 We can only say that it is “somewhat more likely than not” that the underlying trend in 1995-2009 was a warming trend rather than a cooling trend. Saying that the warming since 1995 was “very likely” is already way too ambitious a goal that the data don’t support.

We’ll return to this analysis in an upcoming post. For now, I will note that, once again, Anthony Watts was there to broadcast Motl’s analysis in a Boxing Day post. Now it’s not clear if Harrabin got this question directly from Motl (via Watts), ensuing blog commentary (it even appeared in one BBC blog comment), or from some  other source, say, a willing think tank. (In this connection, it’s worth noting that Ian Plimer and Richard Lindzen are both advisors for the aforementioned Global Warming Policy Federation).

Whatever the exact path of the the contrarian talking point into Harrabin’s consciousness, it seems fair to update the history of this meme:

The end result is that an irrelevant talking point about lack of warming, hitherto propounded by discredited contrarians, has now become an “admission” from Phil Jones about of lack of warming in HadCRU. That’s what happens when confused journalists like Harrabin get their science from blogs, and other even more gullible and biased journalists like Jonathan Petre run with it.

So why did Lindzen and Motl choose 1995 as their starting point? In a comment on Deltoid’s post on the Economist calling the Daily Mail to account (calling the lie for what it is is), I engaged Motl on this very point:

How about since 1994? Cherry-picking much?

Motl answered in the following comment, rather helpfully confirming the cherry-picking:

your point is somewhat shallow. In this thread, I discussed 1995 as opposed to 1994 because that’s the year that BBC asked Phil Jones about, and for a good reason. 1995 is the earliest year when the statistical significance of the trend from that year to 2009 safely fails. Since 1994, you could get a technically significant trend. It would still not be a robust result because a small change of the beginning year would destroy the statistical significance …

BBC asked a very good and highly relevant question in a technically accurate fashion and Jones had to answer it – the answer was clearly “Yes”. He was also allowed to add refinements. It’s just the religious bigots like most of the readers above who dislike the question and the answer – because the answer, “Yes, there’s been no statistically significant trend for 15 years”, shows that even if there’s anything such as “global warming”, it’s not really worth talking about. And you don’t like this fact for the same reason why an Islamic bigot doesn’t like the picture of Mohammed as just another obsessed warrior and/or terrorist: because it’s an inconvenient truth.

That answer rings a little hollow, doesn’t it – now that we know the cheerful Lubos likely played a key role in getting the question asked in the first place!

And that’s not the end of the story – for it seems that even the misleading, cherrypicked claims of  “no statistically significant warming since 1995” are not quite right – at least not for the surface global temperature record. But that’s a tale for another time – stay tuned.

59 responses to “Round and round we go with Lindzen, Motl and Jones”