Briffa teaches, but will McIntyre ever learn?

Recently we’ve discussed several aspects of the raging controversy around climate blogger Steve McIntyre and dendrochronologist Keith Briffa and the supposed destruction (once again) of the “hockey stick” temperature graph.

A few commentators have suggested that more attention should be paid to  McIntyre’s actual “analysis” of Briffa’s Yamal tree-ring chronology, and less to his outrageous accusations (not to mention all the inconvenient evidence that those accusations were completely without foundation).

Now that Keith Briffa has delivered his promised detailed response in an article co-written with Thomas Melvin, it is a good time to do just that. Here, then, is a review of the various problems I and others have pointed out in comments here and elsewhere over the past while, along with highlights from Briffa’s response.

First, here is the abstract of Briffa’s article .

At http://www.climateaudit.org/?p=7168, Steve McIntyre reports an analysis he undertook to test the “sensitivity” of the “Regional Curve Standardised” tree-ring chronology (Briffa, 2000; Briffa at al., 2008) to the selection of measurement data intended to provide evidence of long-term changes of tree growth, and, ultimately inferred temperature variation through two millennia in the Yamal region of northern Russia. It would be a mistake to conclude that McIntyre’s sensitivity analysis provides evidence to refute our current interpretation of relatively high tree growth and summer warmth in the 20th century in this region. A reworked chronology, based on additional data, including those used in McIntyre’s analysis, is similar to our previously published chronologies. Our earlier work thus provides a defensible and reasonable indication of tree growth changes during the 20th century and in the context of long-term changes reconstructed over the last two millennia in the vicinity of the larch tree line in southern Yamal. McIntyre’s use of the data from a single, more spatially restricted site, to represent recent tree growth over the wider region, and his exclusion of the data from the other available sites, likely represents a biased reconstruction of tree growth. McIntyre’s sensitivity analysis has little implication, either for the interpretation of the Yamal chronology or for other proxy studies that make use of it.

At the same time, Briffa has also released a commentary on the use of the Yamal tree-ring chronology in multi-proxy studies and in the IPCC WG1 Fourth Assessment Report (on which Briffa was a co-ordinating chapter author).

So far, McIntyre has only addressed the latter piece and has yet to respond to the Briffa’s detailed Yamal analysis. And who can blame him? Briffa’s response effectively demonstrates once and for all the vacuity of McIntyre’s analysis and conclusions.

At this point it might be useful to display Briffa’s  map showing the various Yamal locations discussed below.

Figure B
This map (after Hantemirov and Shiyatov, 2002, Figure 1) shows the area of the southern Yamal peninsula from which the tree-ring data were collected. Sub-fossil locations are shown as black dots (note that only those with rings dating to the Christian era were used in the analyses discussed here). Red dots mark the locations of the living-tree collections discussed in the text. The larch tree line is indicated by the downward pointing arrows and the spruce tree line by the upward pointing arrows.

As I see it, here are the most obvious problems with McIntyre’s analysis, most of which I have previously discussed here and elsewhere (with hat tips to dendros Jim Bouldin and Delayed Oscillator).

Briffa’s analysis deals with all of the above issues and I won’t repeat all of the details here. However, the following points are noteworthy.

And what are the results? Briffa convincingly shows that:

Details of Briffa’s sensitivity tests are in the web article entitled “Exploring potential biases in the Yamal RCS Chronology: sensitivity to the inclusion of modern data from specific sites”. Briffa shows chronologies for four different data sets, all using the same subfossil data set, combined with various live tree sample sets. The chronologies are all standardized using RCS (regional curve standardization) on the period from 1-1600 AD, as this contains the common sub-fossil portion of the various data set variations. RCS accounts for age-related differences in tree growth, and creates a “unitless” ring-width index set to an average of 1 over the standardization period.

The four data sets include:

One issue, of course, is that Yamal showed strong growth in the final 1991-96 period, for which there is no data in Khadyta River data set. It’s true that there were only five trees in the original Yamal data set for the final year. However, the incorporation of additional shorter-lived trees has now expanded the data set (there are 12 more tree-ring series to 1994 from the POR site and an additional 10 up to 1996  from the YAD site).

Here is the interannual tree-ring standardized growth for the four data sets from 1950-1996.

An examination of  inter-annual tree-ring growth shows only a small reduction in the final growth “spurt”, as seen in the difference between Yamal AD KHAD (magenta) and Yamal All (black). Both the original and expanded Yamal standardized chronologies attain a level greater than 3. (N.B. In this period Yamal AD and Yamal AD KHAD are identical of course; hence the superimposition of Yamal AD Khad magenta curve on top of the Yamal AD blue curve). It can also clearly be seen that, as Briffa states, “the ‘KHAD-only’ chronology is clearly anomalous in the recent period compared to the other series”.

The smoothed versions of the series show a similar story.

But even if the data is truncated at 1990, there are still puzzling differences between Briffa and McIntyre for what should be equivalent “sensitivity” tests. 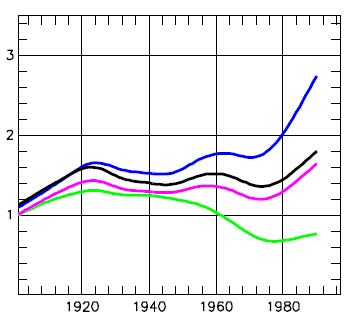 Now here is the corresponding chart from McIntyre.

McIntyre’s soberly-named “little bit pregnant” green curve corresponds more or less to Briffa’s Yamal AD KHAD, that is the original chronology with the addition of the Schweingruber Khadyta set. But somehow it only rises from  1 in 1900 to 1.3 in 1990, about half the rise Briffa finds. As well, the McIntyre’s Yamal KHAD curve appears to descend lower than Briffa’s, to about 0.7 instead of 0.8. Finally, McIntyre’s Yamal AD only rises to about 2.4, instead of 2.8.

These differences could be due in part to different standardization. Briffa uses the period up to 1600, in order to fix a reasonable common standardization between all data sets, but it’s not clear what McIntyre did. It’s possible that he standardized on the entire data set. But there may be other differences, due for example to McIntyre’s inclusion of the entire Schweingruber data set, instead of only the live tree portion, or different RCS implementation or smoothing.

In any event, Briffa’s analysis is far more complete and compelling and clearly demonstrates the robustness of the Yamal chronology, as well as demonstrating that the Schweingruber site is anomalous when compared to other Yamal sites.

Certainly as more data is added the “blade” portion of the Yamal regional chronology may change slightly, as for example seen in the early peek at Hantemirov’s forthcoming updated chronology using more than 200 live tree cores. But Briffa’s  conclusion still stands; nothing in McIntyre’s analysis refutes “the current interpretation of relatively high tree growth and summer warmth in the 20th century in this region.”

It’s a sad commentary that, as Briffa ruefully noted, he was compelled to answer McIntyre by releasing his analysis directly to the public, bypassing the normal channels of peer-reviewed science.

Make no mistake: this is not about “doing science differently” in the internet age. There is precious little science in McIntyre’s analysis. But his barely veiled insinuations of scientific fraud have been exaggerated and trumpeted by a chorus of scientifically illiterate commentators spouting ideologically driven nonsense. Briffa’s list of such commentary, which includes The Telegraph and The Register in the U.K., barely scratches the surface. In Canada’s National Post alone,  Ross McKitrick claimed that “Whatever is going on here, it is not science” and Lorne Gunter asserted that Briffa “kept reducing the number of trees from …  his sample of scores of trees”.

With the U.N. Copenhagen climate conference still two months off, we can expect ever-mounting volleys of such hysterical attacks.

It’s time for scientists to ponder how to respond effectively. A good start would be a joint statement from the leading national science academies decrying both the gross distortions of climate science and the defamatory attacks on scientists emanating from the right-wing media. Enough is enough.

76 responses to “Briffa teaches, but will McIntyre ever learn?”