The latest battle over the “hockey stick” has taken quite a turn, one that may finally lay to rest all the  absurd claims of its demise made by contrarians (not to mention apparently libelous accusations of scientific malfeasance). In previous posts, we discussed climate blogger Steve McIntyre’s scurrilous accusations of “cherrypicking” against UK dendrochronolgist Keith Briffa, and summarized a a quick technical critique of McIntyre’s work by a dendrchronologist known as Delayed Oscillator.

Now comes new evidence that McIntyre’s accusations were completely false. And not only that, one of the Russian researchers who actually control the raw tree-ring data that McIntyre was mistakenly hounding Briffa for, has apparently confirmed that utilization of  a newer more complete Yamal data set has no substantial effect  on Briffa’s Yamal temperature reconstruction.

First let’s review the accusations from McIntyre, as best we have been able to discern them [Updated Oct. 7 to ensure it is understood these are the alleged actions]:

Now McIntyre has posted part of an email from one of the original Russian researchers, namely Rashit Hantemirov, that sheds new light on all of McIntyre’s contentions, to say the least. (The email was not written to McIntyre, but was forwarded to him by an anonymous correspondent).

Low number of used for reconstruction subfossil series is explained by standardisation method (“corridor method”). We had to select the longest series. The same concerns to living trees. There are not much old living trees in this area (in contrast to Polar Urals), therefore we used only 17 (not 12) samples from living trees. At that time we had close collaboration with CRU and I sent to Keith Briffa these raw data.

So, selection of samples has been made by me taking into account length of individual series as well as common requirements to increment cores (exclusion samples with compression wood, rotten wood etc.).

As to reliability of recent increase in tree growth – we have updated our data using many additional subfossil and living trees and using RCS-method. I.e. we used not only long series. Therefore many (120) living trees have been used. Finally, we have got almost the Briffa’s result. These results not published yet. I’m going to prepare paper at the end of this / beginning next year. Some preliminary data you can find in some kind of report in Russian

As to the first accusation, it should be clear now if it weren’t already (as one Eli Rabett and dhogaza have both shown) that Briffa did not have control, or the right to distribute, the raw data. The data belonged to the Russians (Hantemirov and his co-author Shiyatov). Not only that, but it appears they may not have even let Briffa have the complete data set, only the samples they used in their own work. Why? It might be they had not yet published results using the complete data set, and were loathe to let Briffa do so before they did. But it could also be that not all the living tree samples were available before; the timeline for taking of the samples is not clear. Whatever the details, McIntyre has been clearly barking (and snarling) up the wrong tree, so to speak.

[Update, Oct. 8: It turns out that McIntyre had the Hantemirov raw data all along – since 2004 (h/t Craig Allen with more at Tim Lambert’s Deltoid)! To quote one Steve McIntyre: “You can’t make this stuff up”.]

As to the second accusation, it’s true that the Russians pre-selected for age. But they also eliminated some samples for other reasons. More to the point, there is no evidence whatsoever that preselecting for age, necessary for the Russians’ corridor method,  would somehow skew the result towards a “hockey stick” shape, let alone that that was the intention. (And, again, it’s not even clear when additional younger living-tree samples were taken; some or most may have been taken later). But in fact, as Hantemirov explains, his application of the RCS (regional curve standardization) method to the larger live core data set now available, gives a result very close to Briffa’s, as  seen in Hantemirov’s graphs below. The Yamal hockey stick has magically repaired itself.

In my view, the third accusation is specious on its face, and the analysis and jerry-rigged chronologies proffered by McIntyre to support it simply do not hold up, as I discussed previously (also see Delayed Oscillator for an analysis of the issues). If McIntyre still thinks his versions of the Yamal chronologies have merit, then he should submit them to a peer-reviewed scientific journal, as many commentators have already noted.

[Update, Oct. 8: I added details about the Hantemirov document (h/t Igor Samoylenko) and translations of the figure captions (h/t CM).]

The Hantemirov manuscript is apparently “in support of his application for the degree of doctor of science (DSc), the highest post-graduate academic degree” in Russia and is entitled “Dynamics of tree vegetation and climate change in the north of Western Siberia in the Holocene”.

Now this manuscript has been cited before to prove various things. But at least one commentator (named “bill”) at WattsUpWithThat and Bishop Hill had noticed lurking hockey sticks:

Here’s another interesting dissertation with descriptions of the Yamal trees and environment:

From the same document a hockey stick!:
Figure 18- of change in the mean temperature of summer (deviations from the average), smoothed by 50-year filter, and the dynamics of polar timber line

The tip of the hockey stick “blade” (based on a 50-year instead of 21-year filter), is still a full 1  deg C above the MWP (Medeival Warm Period) peak.

Here is Fig 2 (“sample replication” i.e. samples by year), showing the 120 living living tree cores from the late 1990s thinning back to 40 over the last couple of centuries (pale line), together with fossil sample count (bold line):

So clearly there are enough samples to pass the any reasonable “climate audit”, at least for the period of greatest interest.

Figure 5: Reconstruction of summer temperature on Yamal. The data are shown as anomalies from the mean value after smoothing with 50-, 100- and 200-year filters. On the lower graph, the dotted line shows the linear trend in temperature change from 5150 BCE to 1850 CE.

Here’s the 50-year filtered reconstruction for the last 1000 years or so (upper righthand part of the previous chart). 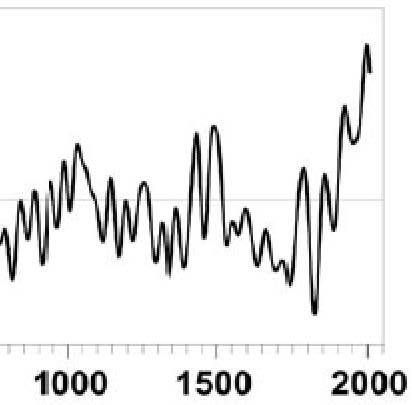 Yep, it sure looks like the hockey stick is still unbroken.

[Update, October 7: It’s probably worth repeating, of course, that there may be more hockey sticks lurking in a paper pointed out previously by both Delayed Oscillator and myself. And who knows, maybe this paper is related to the work in the above Hantemirov “report”.

Despite these large uncertainties, instrumental and tree growth estimates for the entire 20th century warming interval match each other, to a degree previously not recognized, when care is taken to preserve long-term trends in the tree-ring data. [Emphasis added]

Naturally, Hantemirov is one of the co-authors. Obviously this is recommended reading for anyone who is seriously interested in dendrochronology issues.

Later, Oct. 7: I had to see myself, and as one might have guessed, it turns out the focus is on methodology issues rather than on millennial reconstructions. The authors claim to have largely resolved the “divergence problem” through judicious application of RCS, and in doing so find broad agreement between the instrumental and proxy record during the “entire 20th century warming interval”, as stated in the abstract. It appears to be a great step forward for dendrochronology and confirmation of the direction of previous evidence. ]

Meanwhile, Lorne Gunter of the National Post has decided to scramble to the front of the contrarian procession with yet another idiotic diatribe, entitled “The Myth of the Hockey Stick”. Among many passages requiring retraction would appear to be Gunter’s libelous conclusion:

Mr. McIntyre has now discovered that Prof. Briffa kept reducing the number of trees from which he used results, so that after 1990, his calculations were based on just 10 trees from the whole of his sample of scores of trees. And after 1995, they were based on just five. This Prof. Briffa justifies on the need to standardize findings to make them comparable. He may be right.

But when Mr. McIntyre plugged more of Prof. Briffa’s data into the calculations, the hockey stick broke again. The 20th century was not particularly warm.

That loud crack you just heard is the tree limb starting to snap from under Gunter and the rest of the contrarian know-nothings.
Let the backpedalling begin. Or climbdown, as the case may be.

75 responses to “Let the backpedalling begin”