[This post was updated on December 12 to provide additional context that strengthens the original analysis – see below for details.]

This so-called Climategate is really getting out of hand, isn’t it?

Steve McIntyre has published allegations – twice now – that an internal IPCC authors’ debate about the inclusion of Briffa’s tree-ring reconstruction in a key figure from the 2001 WG1 Third Assesement Report was driven by concern about the post-1960 “decline” in tree-ring widths, a decline that showed a marked divergence with the instrumental tempertaure record.

The Climategate Letters show clearly that the relevant context is the IPCC Lead Authors’ meeting in Tanzania in September 1999 at which the decline in the Briffa reconstruction was perceived by IPCC as “diluting the message”, as a “problem”, as a “potential distraction/detraction”. [Emphasis added]

McIntyre even claims that lead author Michael Mann worried that showing the series with this decline would give “fodder” to “skeptics”.

But even a cursory examination of the emails in question shows that the discussion was really about other aspects of the reconstruction, specifically obvious discrepancies between Briffa’s reconstruction and the other two under consideration over the major part of the reconstruction’s length. Thus, once again, McIntyre’s speculations are shown to be utterly without foundation.

Even worse, McIntyre left out intervening sentences within the actual proffered quotes in what appears to be an unsophisticated attempt to mislead.

McIntyre first raised this canard back on November 26:

The relevant IPCC 2001 graph, shown below, clearly does not show the decline in the Briffa MXD reconstruction. Contrary to Gavin Schmidt’s claim that the decline is “hidden in plain sight”, the inconvenient data has simply been deleted. The reason, as explained on Sep 22, 1999 by Michael Mann to coauthors in 938018124.txt, was to avoid giving “fodder to the skeptics”. [Emphasis added]

Yesterday, after two weeks of due deliberation , McIntyre elaborated:

IPCC Lead Authors met in Arusha, Tanzania from September 1 to 3, 1999 … at which the final version of the “zero-order” draft of the Third Assessment Report was presented and discussed…

No minutes of this meeting are available, but Climategate correspondence on Sep 22-23, 1999 provides some contemporary information about the meeting. Mann noted that “everyone in the room at IPCC was in agreement that the [decline in the Briffa reconstruction] was a problem”

McIntyre goes on to selectively quote from emails in the same post-meeting thread to support the above assertion that the post-1960 “decline” in Briffa’s reconstruction was the “problem” being discussed, although he fails to find any actual reference to it. Sample:

IPCC Chapter Author Folland of the U.K. Hadley Center wrote to Mann, Jones and Briffa that the proxy diagram was a “clear favourite” for the Summary Policy-makers, but that the existing presentation showing the decline of the Briffa reconstruction “dilutes the message rather significantly” [Emphasis added]:

A proxy diagram of temperature change is a clear favourite for the Policy Makers summary. But the current diagram with the tree ring only data [i.e. the Briffa reconstruction] somewhat contradicts the multiproxy curve and dilutes the message rather significantly… This is probably the most important issue to resolve in Chapter 2 at present.. (Folland, Sep 22, 1999, in 0938031546.txt) [sic]

Well, so far, there’s no actual evidence, except McIntyre’s say so, that the “decline” or the “hiding” thereof is being discussed. Those devious IPCC authors have managed to “hide” the “hiding”. It’s even worse than we thought!

Seriously, any time one sees McIntyre using elipsis it’s a good idea to check it out. So let’s follow the dots and take a look at Chris Folland’s email, which is first in the chain of three emails that McIntyre quotes (although McIntyre jumps back and forth in a way that obfuscates what is really going on). It’s worth quoting in full:

A proxy diagram of temperature change is a clear favourite for the Policy Makers summary. But the current diagram with the tree ring only data somewhat contradicts the multiproxy curve and dilutes the message rather significantly. We want the truth. Mike thinks it lies nearer his result (which seems in accord with what we know about worldwide mountain glaciers and, less clearly, suspect about solar variations). The tree ring results may still suffer from lack of multicentury time scale variance. This is probably the most important issue to resolve in Chapter 2 at present. [Emphasis added]

How can anyone read this and possibly come to the conclusion that what is being discussed is the “decline” in the late instrumental period? And what word comes to mind for someone who would deliberately remove the fact that the “issue” Folland raises is the lack of multicentury variance for the Briffa reconstruction as a whole?

Equally misleading is McIntyre’s characterization of a subsequent statement of Mann’s (which occurs after the “problem” quote given before):

Mann went on to say that the skeptics would have a “field day” if the declining Briffa reconstruction were shown and that he’d “hate to be the one” to give them “fodder” [Emphasis added]:

So, if we show Keith’s series in this plot, we have to comment that “something else” is responsible for the discrepancies in this case.…Otherwise, the skeptics have an field day casting doubt on our ability to understand the factors that influence these estimates and, thus, can undermine faith in the paleoestimates. I don’t think that doubt is scientifically justified, and I’d hate to be the one to have to give it fodder!

Once again, let’s go follow the dots and see what lies behind, emphasizing the part that McIntyre apparently doesn’t want you to read:

…  But that explanation certainly can’t rectify why Keith’s series, which has similar seasonality *and* latitudinal emphasis to Phil’s series, differs in large part in exactly the opposite direction that Phil’s does from ours. This is the problem we all picked up on (everyone in the room at IPCC was in agreement that this was a problem and a potential distraction/detraction from the reasonably concensus viewpoint we’d like to show w/ the Jones et al and Mann et al series.

So, if we show Keith’s series in this plot, we have to comment that “something else” is responsible for the discrepancies in this case. Perhaps Keith can help us out a bit by explaining the processing that went into the series and the potential factors that might lead to it being “warmer” than the Jones et al and Mann et al series?? We would need to put in a few words in this regard. Otherwise, the skeptics have an field day casting doubt on our ability to understand the factors that influence these estimates and, thus, can undermine faith in the paleoestimates. I don’t think that doubt is scientifically justified, and I’d hate to be the one to have to give it fodder! [Emphasis added]

Finally, it should be noted that this problem of the overall discrepancy between Briffa’s reconstruction and the other two appears to have been largely resolved in a quaint manner – subsequent scientific research! (That’s something McIntyre and his supporters should consider some time).  For the reconstruction discussed in the emails (based on tree ring width in Briffa et al 1999) was superceded by a subsequent study (Briffa 2000, based on tree-ring density) as seen in the final figure above. In this period, Briffa was also working on methods to preserve low-frequency information, and this may have also led to improved reconciliation with the Jones reconstruction.

Here is the original figure from the TAR “zero-order” draft, as presented by Steve McIntyre at ClimateAudit: 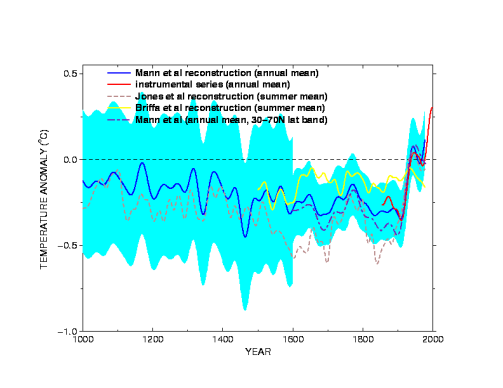 This may well be the Briffa series that Chris Folland questioned as evincing a “lack of multicentury time scale variance” in the first of the chain of three emails at issue. (See Michael Mann’s email here to see the three in reverse reply order; chronological order may be somewhat clearer).

However, that issue is somewhat moot given Briffa’s reply shortly thereafter:

The latest tree-ring density curve ( i.e. our data that have been processed to retain low frequency information) shows more similarity to the other two series– as do a number of other lower resolution data ( Bradley et al, Peck et al ., and new Crowley series – see our recent Science piece) whether this represents ‘TRUTH’ however is a difficult problem. [Emphasis added]

The “recent Science piece” was a reference to:

Comparison of NH temperature reconstructions, all recalibrated with linear regression against the 1881-1960 mean April-September instrumental temperatures averaged over land areas north of 20ºN. All series have been smoothed with a 50-year Gaussian-weighted filter and are anomalies from the 1961-90 mean. Instrumental temperatures (1871-1997) are in black, circum-Arctic temperature proxies [1600-1990, from (2)] are in yellow, northern NH tree-ring densities [1550-1960, from (3), processed to retain low-frequency signals] are in pale blue, NH temperature proxies [1000-1992, from (4)] are in red, global climate proxies [1000-1980, from (5,6)] are in purple, and an average of three northern Eurasian tree-ring width chronologies [1-1993, from (10)] is in green. Although representing a much more restricted spatial coverage than the other series, the last of these (also processed to maintain low-frequency climate information) is included here because of its extended length and because it suggests relatively cooler summer temperatures (at least across northern Eurasia) before A.D. 1000.

The above caption is the original but with the three series of interest highlighted namely Briffa(3, in blue), Jones et al (4, in red) and Mann et al(5,6 in purple).

We can see, as noted above, that the Briffa series is “warmer” than Jones in the 17th and 19th centuries. And, indeed for most of the 19th century, the two present in opposite variation from Mann et al’s multi-proxy reconstruction. So Briffa had already published a series that partially, if not entirely, addressed Mann’s concerns.

Comparing once again to the final figure, we see that little changed from this point on:

What is absolutely clear is that the post-1960 decline was not the “issue” or “problem” being discussed here. And that Briffa’s series as used in the final version of TAR  was very similar to one he had already published (including, of course, its termination in 1960) .

The only question now is how far this nonsense will go in the contrarian echo chamber. So with that in mind, here’s a little poll for your edification and entertainment.

I will be updating this post from time to time with links to major “echoes” of this particular “Climategate” meme.  I hope the list will be short. (Dates in bold indicate the original date of the link; square brackets indicate the date added to the list).

Echoes of  trick to “hide the decline” IPCC “context”