In the “climategate” din, one accusation is shouted perhaps louder and more often than any other: the so-called “trick” supposedly played by IPCC lead author Michael Mann to “hide the decline” in Keith Briffa’s Northern Hemipshere extra tree-ring proxy-based reconstruction, featured along with three others in a key chart in the 2001 WG1 Third Assessment Report (TAR).

According to self-appointed climate science auditor Steve McIntyre, Mann took it on himself to truncate Briffa’s data set and replaced the deleted data with instrumental temperature data, thus creating less of a drop at the end of the resulting smoothed chart. But a closer examination shows the evidence for instrumental “padding” is far from certain. And the difference engendered between different possible “padding” values is minimal in any case.

Even worse, the key element of McIntyre’s narrative, namely the claim that Mann himself truncated Briffa’s data set, is false. In fact, it turns out that the actual data set used by Mann (as sent by Tim Osborn on Keith Briffa’s behalf) contains values only up to 1960 – exactly as in the figure produced in TAR. So once again, we have another egregiously false accusation from Steve McIntyre, one that has been echoed by McIntyre acolytes and CruTape Letters authors Steven Mosher and Thomas Fuller.

Regular Deep Climate readers will recognize immediately the chart at the centre of all the controversy, namely TAR Figure 2-21 showing various reconstructions of Northern Hemisphere tempearture. Most of the attention has been on a supposed “trick” to “hide the decline” after 1960 in the Briffa 2000 reconstruction, shown in green below. (Because of the oft-discussed “divergence” between temperature and tree-ring density, Briffa himself did not generally show the last 20 years of this reconstruction when using it to show comparative millenial temperature history; neither was post-1960 proxy data used to in the calibration of the reconstruction against the instrumental record.)

Previously, I discussed McIntyre’s claims that the climategate emails of late 1999 demonstrated pressure on Keith Briffa to produce a reconstruction more in keeping with Mann’s “hockey stick” reconstruction, preferably omitting the post-1960 “decline”. An examination of email passages omitted in McIntyre’s account show that it was Briffa who wanted to rush inclusion of his latest “low frequency” reconstruction, but was advised by Mann that it would have to wait until the Second Order Draft in early 2000.

In recent weeks, McIntyre has adjusted his narrative to add new details to his allegations about TAR 2-21. One specific issue he has raised is that of “padding” and “smoothing”. Smoothing refers to various techniques to “smooth” out a data set to remove the “noise” of high-frequency fluctuations, such as interannual variations. These techniques usually require a transformation of each data point by incorporating neighbouring data, for example, in a low pass filter (usually implemented as a weighted centred moving average).

Such techniques often require “padding” of the data set with extra data points for use in smoothing as one approaches the end point. McIntyre has recently made a number of allegations about how such “padding” was performed in the handling of the Briffa data set.

As far as I know, the first time McIntyre raised this issue was at his Heartland conference presentation on May 16 [PDF]. There he stated:

However, Mann’s spaghetti graph in the First Reviewer Draft a few weeks later (see Figure 8) had no inconvenient 20th century decline. It used what Jones later called Mike’s trick. While climate scientists later described the trick as “sophisticated”, its main element was very coarse – adverse data after 1960 was simply deleted. A second element of the trick was a little more subtle. Any smoothed series requires forward values to calculate the smooth. It appears that Mann substituted instrumental data for actual data after 1960 to calculate the smooth before truncating the smooth in 1960. This pulled up the end values of the smoothed series, further disguising the decline. … [Emphasis added.]

And here is my admittedly less sophisticated emulation (based on a high-order Butterworth low pass filter with a Hamming weight window):

Obviously the smoothing in the IPCC version is, well, smoother, especially from 1600 to 1700. So I certainly make no claim that this is an exact emulation. However, the emulation is close enough to evaluate any major differences between “padding” techniques.

One curious fact is that in order to reproduce the 1940 Briffa peak, the series must be realigned upward by about 0.06C or so. (Unravelling the reasons for this has been an interesting exercise in itself, but I’ll leave the explanation for part 2).

Alert readers will note that the MBH curve is labeled as having been padded with the instrumental mean beyond the end point for purposes of smoothing. This was acknowledged by Mann in a recent comment at RealClimate, where he also explained the rationale for the technique, but noted that he no longer uses the method. However, it is not certain that the padding of the other two data sets was done this way, as explained below.

It’s perhaps one thing to establish a smoothing boundary in one’s own data set by padding with an instrumental mean from a subsequent period to better estimate behaviour at the end point. But with regard to the Briffa data set, it is McIntyre’s contention that “it appears Mann substituted instrumental data for actual data after 1960”.

In answer to a post by physicist of Arthur Smith (who demolished similar claims by Steven Mosher and Thomas Fuller concerning the Briffa series in the AR4 “spaghetti graph”), McIntyre detailed various options studied by his team:

In TAR, the 1960 value of the smoothed Briffa reconstruction is about -0.03 deg C or so, as opposed to the -0.15 deg C in AR4. Mann used a different filter (40-year hamming rather than gaussian), but this, in itself, is not enough to account for the difference. TAR itself doesn’t even disclose the deletion of the data, so it is little help in reverse engineering what Mann actually did. A couple of different alternatives have been experimented with by Jean S, UC and myself, each of which involves padding 20 years of something else from 1960-1980 instead of actual data. Jean S and UC have got pretty good replications using variations of (a) actual instrumental data; (b) average instrumental data 1961-1990 (zero by definition of the reference period). After replacing/substituting actual Briffa data with something else, Mann then smoothed and truncated back to 1960.

Here McIntyre implies that all of the 0.12C difference between the end points of the Briffa series in AR4 and in TAR can only be accounted for by padding with instrumental values or the instrumental mean. This is false, as we’ll see below.

Curiously, McIntyre refers to the “40-year Hamming filter”, but neglects to mention that the padding technique was also specified in the same sentence of the original caption for TAR Figure 2-21, which refers to “boundary constraints imposed by padding the series with its mean values during the first and last 25 years.”

It turns out the effect of the different padding values is not great, at least in my particular emulation. The actual shape of the last part of the curve is best reproduced by padding with the mean of the last 25 values (1936-1960); both have only a little bump up from a local minimum at 1958. The final 1960 value is at -0.04C, lower than the actual curve at -0.025C.

The two alternatives touted by McIntyre seem much less likely: the 30-year mean has a pronounced upward tick with an early trough at 1954, while padding with the instrumental mean results in a flattening but no upward tick at all. The 25-year instrumental mean (1961-1985) does come quite close however.

But in the end, none of this is particularly conclusive as such small differences in end points could move up or down depending on the exact smoothing used. For all this talk of “hiding the decline”, it turns out that padding with the 25-year instrumental mean rather than the final 25-year series mean only makes a difference of one-hundredth of a degree!

Clearly, the use of instrumental values or mean is incompatible with the end of this series.

As a final indication of just how small a molehill McIntyre is attempting to build into a mountain, take another look at the full Briffa series in the chart I displayed above.

If you look carefully at the end of the green Briffa series in 1960, you might notice a small distortion. In fact, I’ve shown the series twice – with both the instrumental mean and series mean padding. It’s hard to see even when you know both are there; at normal viewing resolution the tiny difference from these two padding alternatives would be imperceptible.

Now let’s turn finally to the first part of McIntyre’s accusation: that Mann “deleted” actual values and “replaced” them.

McIntyre has noted that Tim Osborne sent Mann the so-called “climategate” Briffa data set on October 5, 1999. Indeed this particular data set did run up to 1994. However, McIntyre has conveniently omitted the fact that Osborn explicitly stated:

Even worse, the above claim that a truncated version of this data set was used in the First Draft of TAR is erroneous. That chart clearly used a previous “low frequency” reconstruction starting in 1600, not the “climategate” data set. And McIntyre knows this very well – because he displayed the chart in his Heartland presentation. 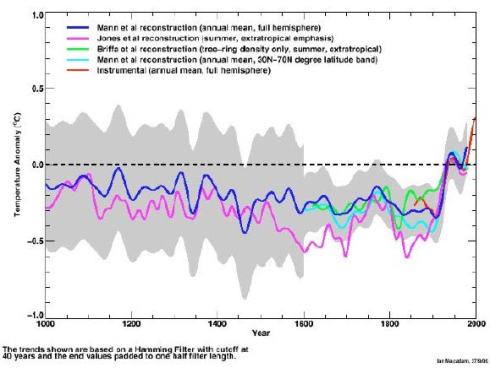 In fact, as I showed recently, Mann informed Briffa and Osborn in his response on the same date that the new series was too late for the First Draft and would probably not be used.

During the early 2000 run up to the TAR Second Order Draft, Mann asked Briffa for the final published version of the reconstruction, along with the appropriate reference. Once again, Osborn replied on Briffa’s behalf.

No doubt it is this second email and data send to which McIntyre referred, when he claimed last November: “Interestingly, the values from 1402-1994 were sent from Tim Osborn to Michael Mann on a couple of occasions …”.

Here is the end of the attachment (with contact information removed) from that email:

That’s right. Briffa’s data set only went up to 1960, so that’s exactly what Mann started with. No more, no less.

So, once again, the accusation that Mann “truncated” or “chopped off” the data set is proven to be utterly false.

The whole point of showing multiple reconstructions is to present researchers’ best estimates of past temperature. It was perfectly reasonable for Briffa to omit the recent portion of his paleoclimatic record known to be at odds with actual temperature, especially when that section was not even used for calibration.

Having said that, I do support calls for more detailed explanations, documentation and archiving of data sets used in IPCC reports and perhaps even drafts. AR4 was certainly a step forward in that respect, and no doubt that trend will continue in AR5.

In the end, one compelling reason to do this is to provide a preemptive defence against unwarranted criticism. One never knows when self-appointed climate science inquisitors will bend the truth in an attempt to portray legitimate scientific inquiry as something nefarious.